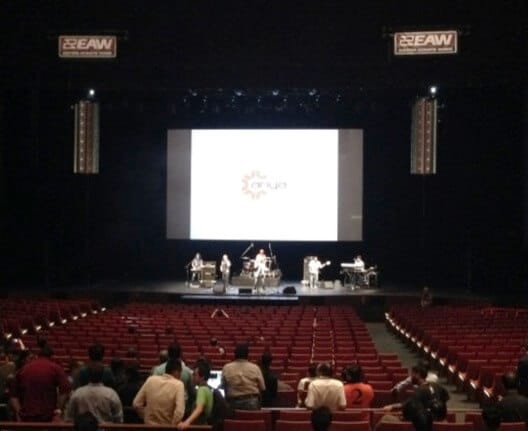 Anya Debuts in the Asia-Pacific Region

The first day kicked off with welcoming remarks by EAW President Jeff Rocha and was followed by an in-depth demonstration by EAW’s Technical Training Manager Bernie Broderick of Anya’s capabilities using music playback. The demo covered Anya’s mechanics, DSP, amplification, rigging and more. The group then toured the 101-hectare Gardens by the Bay horticultural park and its Supertree structures, which include weatherproof EAW speakers for ambient sounds and music. The day ended with dinner at the spectacular 1-Altitude rooftop restaurant/bar on the top level of the 282-meter One Raffles Place Building, the highest venue in Singapore, which entertains its guests with EAW sound.

On day two, the group began with a demonstration at Cathay Cineplex Jem’s Digital Xtreme hall’s state-of-the-art Dolby Atmos system, featuring 46 channels of EAW sound.They continued on to the breathtaking Singapore Sports Hub, which will soon feature a complete EAW audio solution when it opens this Spring. The event culminated at Star Performing Arts Centre, one of the largest indoor auditoriums in Asia, where EAW demoed a 16-enclosure Anya system with SB2001 subwoofers, beginning with prerecorded music and moving into a live band with Martin Frey, FOH engineer for Alan Parsons Experience, running the board.

Davwinder Sheena, Asia-Pacific’s Managing Director for EAW, noted that everyone left the two-day launch event with a clear understanding of Anya technology. “People were keen on experiencing the Anya system for themselves because of what they’d already heard about it,” Sheena said. “It went so well, that partners who already have Anya systems are now planning to do similar events locally in their own countries.”

For information about Anya and its fast-approaching European launch festivities, visit Musikmesse Stand: Halle 8.0 L56 (shared with Mackie and Ampeg) from March 12-15, 2014, or contact your local EAW representative.