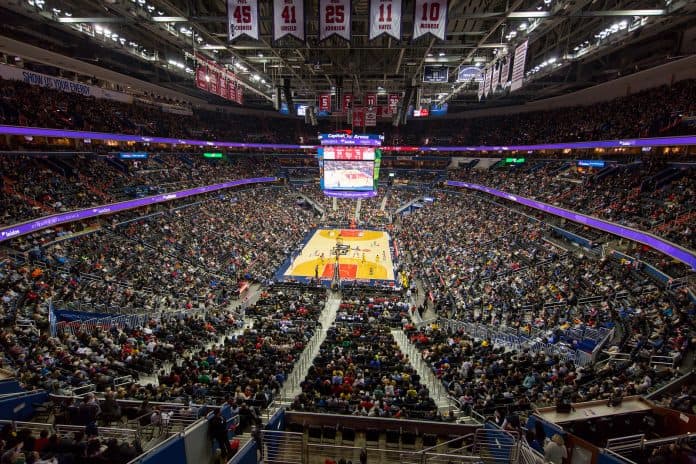 “With changes in technology and the age of the system, we knew it was time to update the sound system,” comments Capital One Arena/JLL sound engineer Mark McCabe. “We had areas in the arena that did not have good sound coverage and equipment that was failing that could not be repaired.” “The old system didn’t provide the capabilities that are expected at modern NBA and NHL events,” adds Stu Schatz, a consultant at Wrightson, Johnson, Haddon & Williams (WJHW; http://www.wjhw.com), the design and consulting firm hired by arena management company Monumental Sports & Entertainment to manage the sound system renovation. “We wanted to modernize, and we looked at several options.”

Schatz, WJHW Associate Principal Kevin Day, and other members of the WJHW team worked closely with McCabe and the arena team to find a solution that would work for the many different types of events held at Capital One Arena. “We were the designers, and Clare Solutions did the install,” Schatz details. “Clair has a great team, and their lead on the project, Jim Devenney, did a terrific job.”

For the main loudspeaker system, the WJHW team chose 54 EAW Anna 3-way full-range array modules, configured as 6 arrays of 9 Annas. The Anna is part of EAW’s Adaptive Systems loudspeaker line, which can assess and perfectly match the three-dimensional performance requirements of any venue. Adaptive Systems loudspeakers utilize a high-resolution array of discretely powered and processed acoustical devices, in concert with software, to create optimized results without physical reconfiguration. This ability to electronically configure is a major reason the WJHW team chose the EAW solution.

“The arena has basketball, hockey, and arena football,” Schatz notes. “They also have a lot of concerts. We liked the EAW system’s ability to quickly reconfigure because there are plenty of times, especially in the fall, where they have hockey one night and basketball the next.”

A basketball court is considerably smaller than a hockey rink, which presents a challenge when aiming the sound. “Ideally you want to adjust loudspeaker coverage to match the seating,” Schatz explains. “When reconfiguring from basketball to hockey, there’s at least 50 feet more playing surface and less seating on each end. In more traditional systems, you aim to hit the seats at the end of the court for basketball and know that for hockey you’re putting sound on the ice for that extra 50 feet at each end. Of course that’s never good because ice doesn’t absorb sound; it reflects it. But with the EAW system we simply recall a preset to reconfigure the system electronically to fit the seating, rather than having to re-aim mechanically, as with most systems. For concerts, you want to pull the house system up and out of the way, and we can do that easily as well.”

To handle the powerful low end required in a major arena, WJHW specified four arrays of five EAW Otto Adaptive Subwoofers, with an Otto array placed behind each of the four corner Anna arrays. Utilizing two high-powered 18-inch woofers paired with independent onboard amplification, processing, and networking, Otto subwoofers extend Adaptive Performance to the lowest octaves of the audible spectrum. Combined in arrays, as at Capital One Arena, Otto provides a wide variety of possibilities in low-frequency pattern control.

Supplementing the main system, 24 EAW QX364 2-way trapezoidal loudspeakers form a delay ring to cover the upper back seats at the rear of the arena. The QX364 delivers the high output level needed for medium-throw arena fills, with broadband pattern control that is especially useful in a highly reverberant environment. That said, notes Schatz, “considering its vintage, the Capital One Arena is pretty well behaved acoustically. It has been acoustically treated reasonably well.”

The arena’s Dante-enabled Yamaha QL5 digital console was purchased only a year before the renovation. “We kept the QL5, as there was no reason to replace it,” recounts Schatz. “The Dante network is managed with several BSS processors. One processor at front-of-house, on the upper concourse level, takes everything Dante in and sends over fiber up to the network switch on the catwalk. From the catwalk, it’s CAT6 to the loudspeakers.” Also at the catwalk is a rack of Crown DCi 4|1250N amplifiers that drive the QX364s for the delay ring, under-scoreboard boxes, and other fills.

The existing sound system for areas of the venue outside of the main bowl was left in place, connecting to the main system at the front-of-house processor. The existing access points for the broadcast team and announcers also were left in place.

From WJWH’s viewpoint, the project is a team success. “WJHW has a longstanding relationship with EAW, and we appreciated the support of the EAW people, both at the sales end and commissioning the system,” praises Schatz. “Mark McCabe did a terrific job of driving this for the venue, and Clair Solutions did an excellent install.”

Most important, the Capital One Arena team is happy. “The new EAW sound system has corrected the issues, and due to sound mapping done prior to the new system being installed, we now have very good sound coverage in the arena,” confirms McCabe. “With the updated sound system, it is very easy to address different sound needs in the venue and to deliver a better sound experience for the fans. Overall, we ar e very pleased.