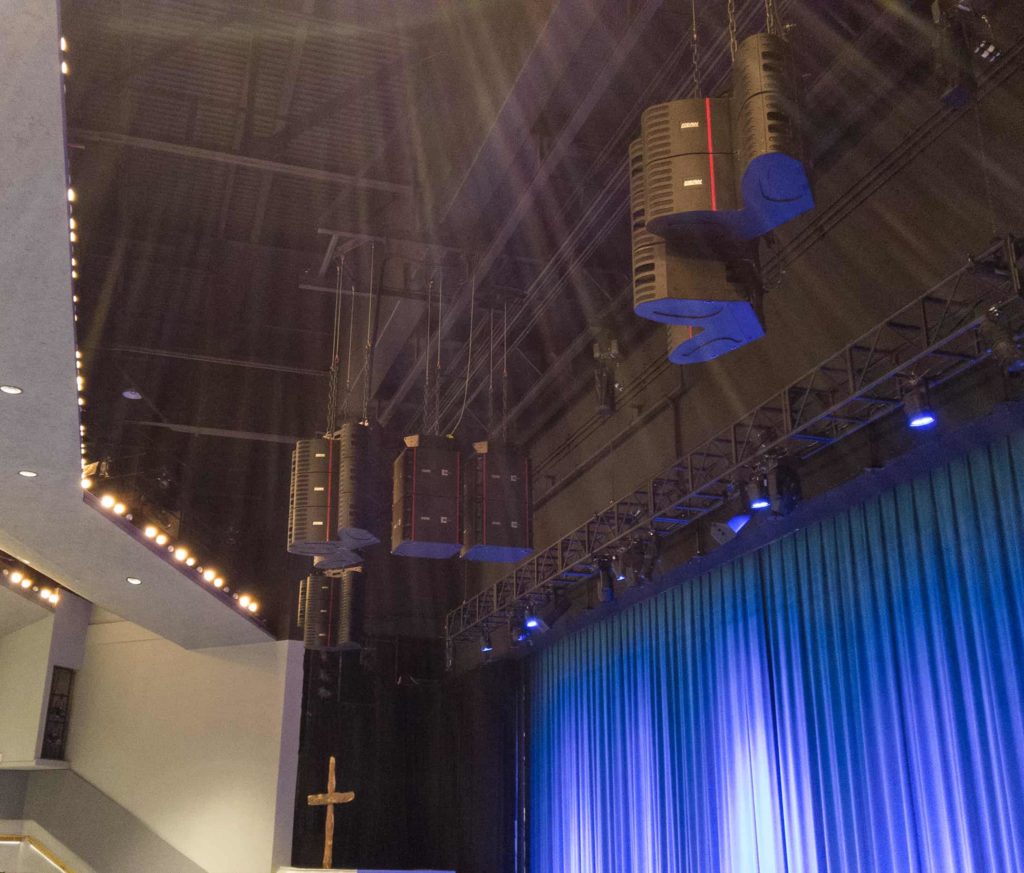 The history of 3Crosses Church is inextricably intertwined with that of the East Bay region of the San Francisco Bay Area. The church was founded as a congregation of three elderly women and a Sunday school of 15 in 1937, the same year that saw completion of both the San Francisco Bay Bridge and Golden Gate Bridge. For many years, a primary feature of the church was ministering to the many sailors who lived in or passed through the area’s naval bases. When the church moved, at the close of the 1960s, from its origins in Oakland to a new building in Castro Valley, dirt from the church’s construction site became part of what is now the Oakland-Alameda County Coliseum (now the Oracle Arena and RingCentral Coliseum).

In all that time, there had only been three senior pastors heading the church. But times change, and as Dr. Danny Strange became the fourth senior pastor in 2019, the church decided it was time to upgrade the 20-year-old sound system in its main sanctuary to gain the benefits of the latest technology.

Since Michael Garrison founded MGA in 1976, the design-build firm has specialized in sound solutions for houses of worship, so it was natural for 3Crosses to ask MGA to propose a solution for its 1,500-seat auditorium that would improve coverage and deliver better LCR imaging. But what MGA came up with was not what the technical staff at 3Crosses expected. “The biggest issue in the room was a lack of good, solid low end,” describes Dave Staats, Audio Director and Crew Chief at 3Crosses. “It didn’t have punch, and it took a lot of EQ to get it even to sound acceptable. It was a constant battle.” Garrison quickly realized that a traditional line array system couldn’t deliver the horizontal coverage needed in the wide room, so he turned to EAW’s relatively new Adaptive Systems.

“We had kind of decided what we wanted and how it was going to be done,” 3Crosses Technical Director Patrick Brandon recalls. “But then MGA brought us another alternative.” MGA’s new idea looked like a curveball to 3Crosses, according to crew member Dennis Staats, who also operates his own consultancy, Dennis Staats Engineering. “MGA had made a proposal that offered a choice of three different types of systems. The third option was an EAW Adaptive System,” he recounts. “We were highly skeptical and basically dead set against even considering it.” But the 3Crosses team trusted MGA enough to make a trip to Abundant Living Faith Center in El Paso, Texas, which had installed a similar system, and give it a listen. What they heard completely changed their minds. “To walk into that room and hear what was possible was an experience of a lifetime,” Brandon marvels. “This was truly a revolutionary new way to hear sound in a room with all kinds of sonic problems. The EAW Anna 3-way full-range array modules sounded incredible.”

This was enough to convince the team of the system’s viability but there was more. “The system exceeded our goals,” proclaims Brandon, “because not only could every person in the auditorium have the same experience, but every person in the room could have stereo.” The decision was made. MGA installed 16 Anya 3-way full-range array modules, with 5 modules in each of the left and right arrays and 6 in the center array. Low-frequencies were supplied by four Otto adaptive subwoofers. Anya’s distinctive winged cabinet shape signals right away that it is a different kind of loudspeaker. Inside each module, 14 one-inch-exit, 25 mm voice coil, high-frequency compression drivers are loaded on a proprietary horn whose mouth nearly fills the entire face of the enclosure. Six five-inch cone transducers are arranged in two columns, which use Radial Phase Plugs™ and Concentric Summation Array™ technology to sum their energy coherently with the HF wavefront in the horn. Two 15-inch cone transducers use Offset Aperture™ loading to increase the spacing of their apparent acoustical centers, extending effective horizontal pattern control well into the LF range.

Anya columns hang straight, with no splay, eliminating the need for pullbacks of any kind, and can achieve up to 70 degrees of coverage from each column. EAW’s Resolution 2 software controls the performance of Anya’s 22 drivers, each of which has its own DSP and amplifier channel, enabling Anya arrays to exhibit asymmetric, and sometimes downright radical, coverage patterns. “The beauty of that is that you keep energy off of the side walls to eliminate high-energy reflections,” states Dennis Staats. The result is dramatic, claims Dave Staats. “Being able to keep all of the energy in the areas that you want it and out of the areas where you don’t is mind-blowing.” The proof is in the performance, and everyone involved has been converted to believing in Adaptive Technology. “Now we have a tool in our toolbelt that can deliver solutions other tools haven’t been able to achieve,” notes Garrison with satisfaction. “They far exceeded our expectations of what could be done and what was possible,” emphasizes Brandon.

Dave Staats is pleased to admit his initial impression has been changed. “We have gone from being strict opponents of the idea to being proponents-you might even want to use the word ‘evangelists’-of this technology,” he enthuses. “I think anyone that doesn’t consider this system in any install would be making a huge mistake.”