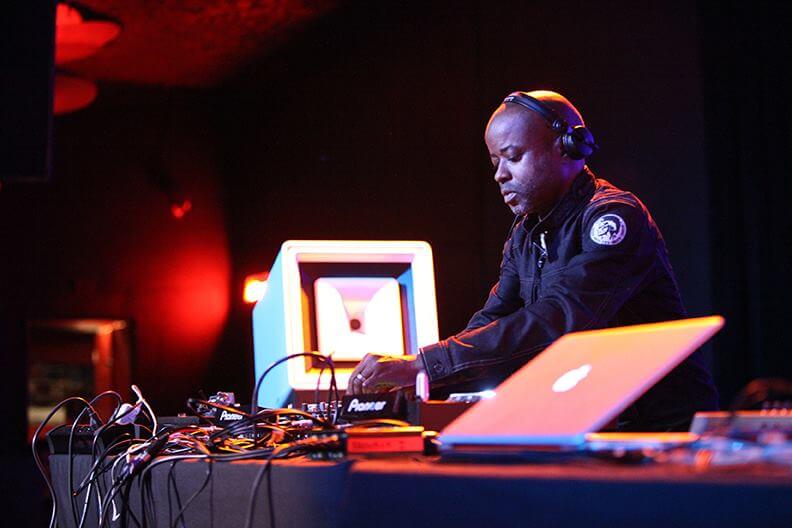 For the second year, Avalon was chosen as a primary sound system during one of the world’s premier electronic music festivals, the tenth annual Decibel Festival in Seattle, Washington (September 25-29, 2013). Avalon is a line of loudspeaker systems optimized for dance clubs, and Decibel chose it because it has set the benchmark for state-of-the-art club sound in the global dance community.

Decibel Festival’s Technical Director Vance Galloway reported that Avalon’s performance throughout the four days of live shows was an enormous hit with the audience and performing artists. Some of the acts that performed through Avalon include Juan Atkins (shown), Machinedrum, Lorde, The Orb, Shabazz Palaces, and many others.

As a systems tech and touring sound engineer specializing in electronic music, Galloway reports being well aware of the significant challenges that exist in creating a PA system that can keep pace with modern electronic and dance music.
Juan Atkins @ Decibel Festival 2013

“Today’s electronic music is redefining the requirements for PA systems,” explains Galloway. “Extended bass, extreme transients and reliance on ultra high fidelity are hallmarks of the new era of electronic music…and frankly, most PA systems simply can’t keep up. However, the Avalon system is, by far, the most amazing purpose-built PA system I have ever heard for electronic music. It’s simply in a league of its own.”

Decibel Festival’s Founder and President Sean Horton recounted, “there was considerable hype around the world debut of Machinedrum’s Vapor City Live performance, and I thought the club never sounded better thanks to EAW’s bass cabinets. It was a pinnacle moment for the festival.”

Avalon was co-developed with John Lyons of John Lyons Systems and Avalon Hollywood (known globally as a nightclub where DJs launch their careers). Avalon systems are currently installed in some of the most popular nightclubs in the world, including 1 Oak (Las Vegas), Gossip (Singapore), Light in Mandalay Bay (Las Vegas), Mighty (San Francisco), and other hot spots.