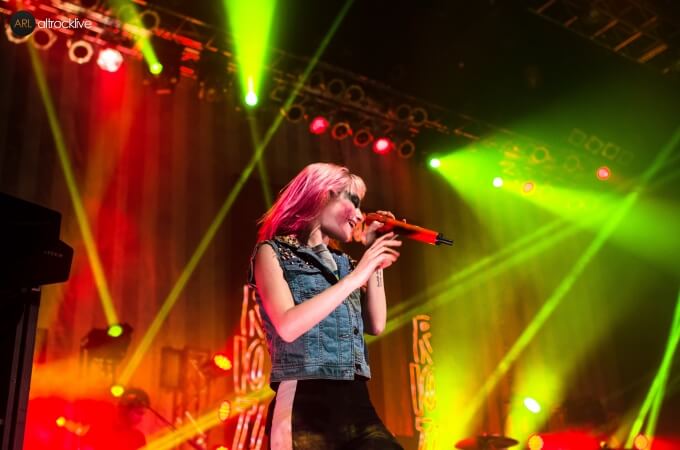 Eastern Acoustic Works® (EAW®) delivered a temporary sound system to the House of Blues in Boston for a one-night performance by alt-rock powerhouse Paramore, whose front-of-house engineer Eddie Mapp (photo at left) requested the opportunity to use the system. According to EAW President Jeff Rocha, Mapp had visited EAW’s Whitinsville, MA factory during Anya’s development and had heard the system at Coachella, but schedules prevented him from using the system in a live performance.

“Eddie gave us valuable insight during the development process for Anya,” Rocha said. “When we saw that Paramore’s schedule brought them through Boston, we reached out to the House of Blues to see if we could get Eddie a chance to mix on Anya. The team at House of Blues was fantastic about this unusual request, and the result has been great.”

Like many large concert halls, the House of Blues in Boston features a large, steeply-raked balcony notorious for challenging sound reinforcement systems, particularly in that it reaches high above the PA. Many traditional line array systems struggle to cover areas “above the hang”. EAW’s Anya system can cover nearly 180° in the vertical plane, so reaching the upper balcony posed no challenge whatsoever.

“The coverage and ability to directly localize the sound source with minimal interference from the room was incredible!” Mapp said. “It’s exciting to see new approaches in audio, and I think it’ll be fun to see how Anya develops especially with its ability to quickly adapt to a wide variety of situations. When you can’t exactly point the speaker at the people, Anya lets you point the sound at the people.”

Mapp explained that often the reality in a venue differs from the plans and drawings and that coverage areas change based on ticket sales. Referring to Anya’s unique capabilities, Mapp said, “This becomes a win-win situation not only for (front-of-house) engineers but for everybody in production and other artistic decision-makers. When the PA can’t always be placed in the most desirable acoustic listening position, it can cause a lot of tension. With Anya, you have a lot more leeway about where you put the PA.”

According to Rocha, an Anya array can act as many different sound systems even in the same venue. “If a large concert hall had an Anya system installed and they decided to close the balcony,” Rocha said, “the engineers could simply tell Anya not to cover the balcony. Anya would reconfigure the Adaptive Performance parameters to cover only the orchestra. It would take no more than five minutes to create a completely different response profile from the exact same PA in the exact same location.”

In terms of sound quality, Anya left Mapp favorably impressed. “Anya doesn’t sound like a typical concert array,” Mapp said, “more like a pair of giant nearfield monitors. In the Paramore show, there are a lot of subtle elements such as various acoustic and percussive instruments from ukulele to glockenspiel that don’t always translate well it into the mix on some systems. But with Anya, everything was immediately present with the necessary transient response required for an extremely dynamic show. To tell you the truth, mixing on this system is a lot of fun.”