VILJANDI, ESTONIA, APRIL 22, 2021 – Estonia’s five-decade old Saarepeedi Cultural Center recently sought out a new PA for its facility and brought on Heliart OÜ for the project. Priit Kivimägi, CEO of Heliart OÜ, and his team were looking for a system with high SPL, consistent coverage and exceptional vocal intelligibility. Eastern Acoustic Works (EAW®) QX300 Series speaker system along with its RL18S Active Subwoofers were selected due to its audio capabilities as well as its ease of use.

The Saarepeedi Cultural Center (Estonian Saarepeedi Rahvamaja), located in southern Estonia near Viljandi, is often considered the heart of Estonian folk music. Serving as a multi-functional venue for the local community, the space is used for different activities and performing arts including theatrical and dance events, seminars, rehearsals, sports and musical acts including choirs and live bands.

The venue required a system that had great broadband pattern control and with choirs and folklore musicians performing, the low frequency energy on the stage had to be kept to a minimum. The main PA consists of two EAW QX364’s flown in left-right position supplemented by four EAW RL18S subwoofers positioned in the center of the stage. The team was limited by the construction of the building as to where to place the subwoofers, therefore, custom frames were built around the structures inside the stage to accommodate two cardioid pairs of RL18S subwoofers.

“The large 4-inch voice coil compression driver with constant directivity horn is surrounded by two pairs of phase-aligned high power 10-inch low frequency drivers,” says Kivimägi. “This extends the pattern control to lower frequencies and therefore keeps the energy off the walls and ceiling, and in the audience area. This really helped combat the acoustical challenges of the building’s large painted concrete walls and high ceilings.” 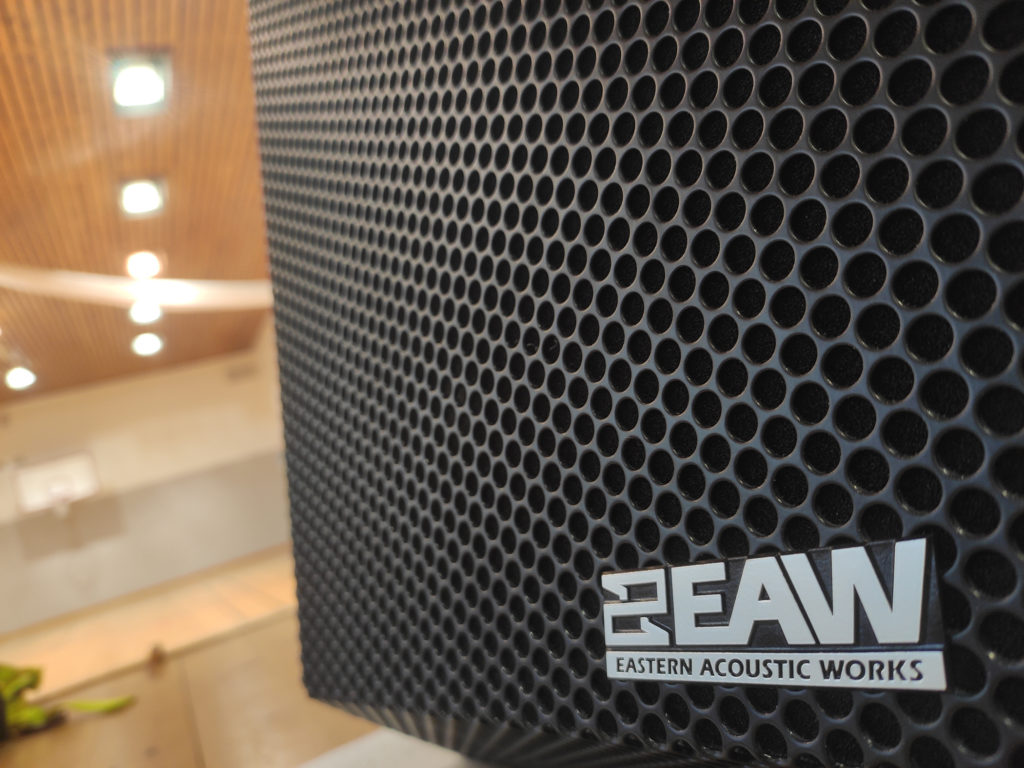 Ease of use for the venue was also a main factor in selecting the PA system. “We knew from the start that EAW’s QX series would meet these needs with ease and the built-in cardioid functionality of EAW’s RL18S Active Subwoofers would help to keep the system easier to operate,” adds Kivimägi. “All this is packed into a visually pleasing, small footprint enclosure. What I like most about the QX series, is its symmetrical design. Linear phase response and full frequency spectrum originating from a single source makes this a predictable and easy to operate system.”

From a system design point of view, the team had to consider the venue’s electrical system. Since it’s an older venue, it was outdated and did not meet the needs of modern AV solutions, especially when digital networks are involved. “The last thing we needed was harmonic currents wandering around the electrical system resulting in audible hums or other unwanted noises,” adds Kivimägi. “For this project, a new electrical system was designed based on the requirements of the sound and lighting equipment resulting in a dedicated audio-only distribution box with full automation.”

The systems power options (single, bi- or triamp mode) were also a benefit. “The triamp configuration was the key to keeping the overall impedances, speaker cable losses and amplification cost in perfect balance. The QX300 is truly a state-of-the-art system. In addition, the system’s low idling power consumption is a great feature from an energy savings perspective. We are thrilled with the results and so is the community.”